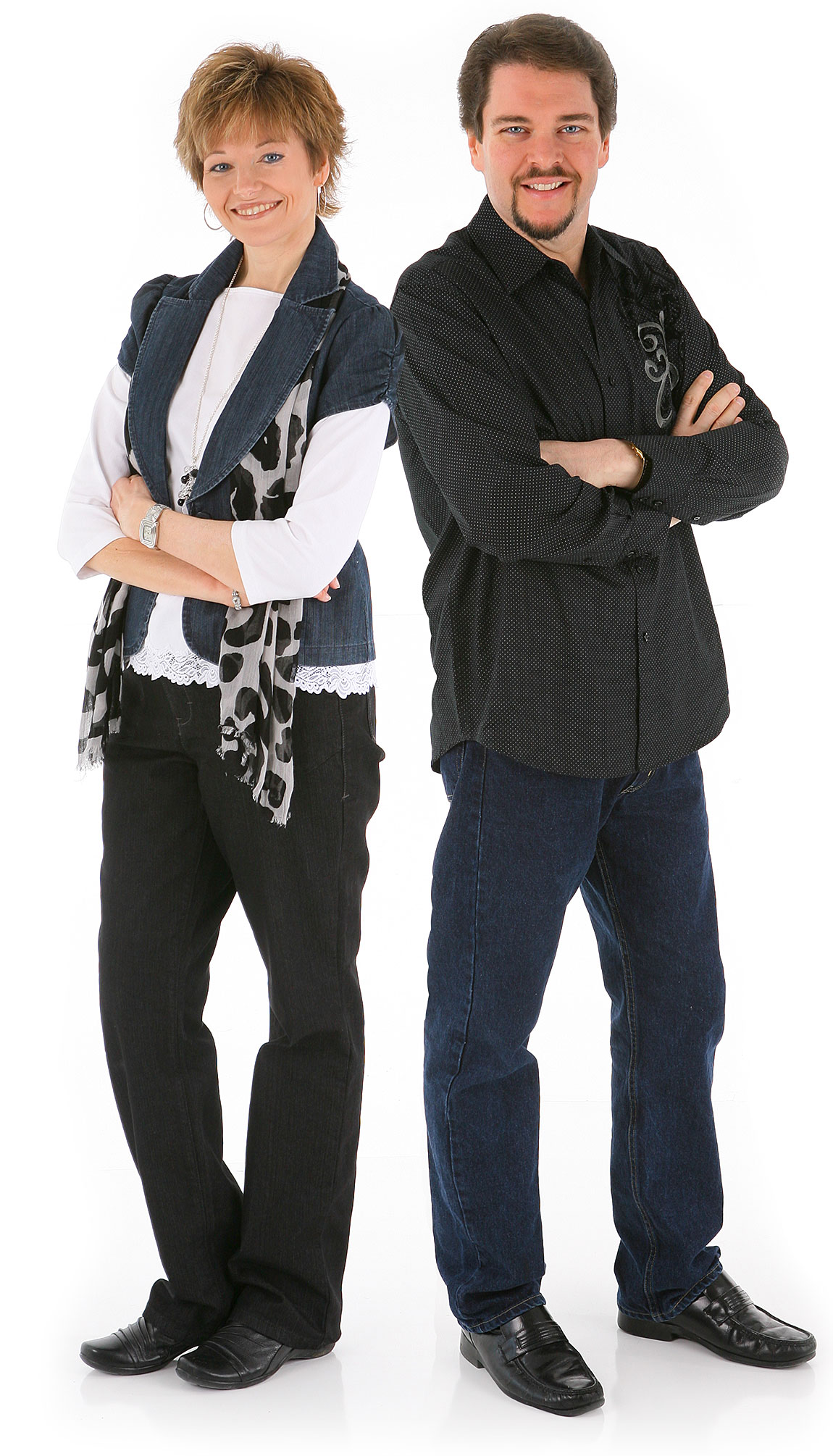 Take a stand, Let's live what we believe,
Take a stand, So the world will see.
We can make a difference for Jesus in this land.
Don't just take a seat... Take a Stand!

Since 1996, Phil and Pam Morgan have been living those words every week in front of audiences across the country. Their passion is to help others fall in love with the all-powerful God who is the foundation of their lives. Their mission statement sums it up - "Teaching ordinary people to trust an Extraordinary God." They don't just sing about it, they've experienced God's miracle-working power first hand.

Phil and Pam grew up in Christian homes and loved music from a young age, each taking piano lessons and singing in school and church choirs. Phil developed a skill for songwriting and when he and Pam met in high school, Phil had written over 200 songs. At age fifteen, he started performing around the midwest in various bands and stage shows. At the prompting of a fellow musician in 1996, Phil and Pam went into the studio to record a gospel CD of Phil's original songs. This was the beginning of what would become their life work.

Four years, three albums and hundreds of concerts later, the Morgan's life and ministry forever changed when a tragic automobile accident left Pam completely paralyzed from the chest down. Doctors said she would never walk again, but God stepped in and miraculously brought Pam back to her feet. On June 4th, 2001 (exactly one year after the accident), Pam stepped up to a studio microphone to record her testimony song "I STAND," part of the Morgan's landmark album, Living Proof. Soon after, Pam and Phil returned to the stage and resumed a full-time touring schedule. (More details on the accident and Pam's amazing healing can be found in this Associated Press article.)

When word of Pam's remarkable story got out, requests for interviews came from across the country. The Morgans have appeared on Oprah, Montel Williams, the 700 Club, Life Today with James and Betty Robison, The Paula White Show, ABC, CBS, TBN, CBN, INSP and hosts of other television and radio programs. A re-enactment of their accident and Pam's healing was featured on "Only a Miracle" on the Discovery Health Network. They continue to average 120 concerts each year, spanning the continent from Alaska to the Caribbean Islands. In addition, their music has been heard internationally, on radio from Europe and Russia to Australia.

In 2009, Pam wrote the complete story of their accident and her miraculous recovery in her book, I Stand. She has since become a popular speaker for Women's Conferences and events. Pam has a passion for Women's ministry and leads Bible study for close to 100 women in the Morgan's home church. Information on Pam's speaking ministry can be found at her webpage, www.WalkingMiracle.com.

Phil spends the majority of his time managing the daily details of the ministry, but still makes time to write all the music they record. He ocassionally teaches songwriting classes and coaches up and coming groups on presenting their music and message effectively. Phil began a ministry newsletter in 1999 that has grown into a huge outreach. His gift of finding God's lessons in everyday life (often with a unique humorous slant) is read by thousands each week. (Subscriptions are free - sign up here.) These intimate glimpses into the Morgan's lives have been compiled into two books, The Inspiration Station (2006) and Puddles of Joy (2012-co-written with Pam).

Phil also enjoys encouraging others to achieve a healthy lifestyle. After a lifelong struggle with his weight, Phil lost 85 pounds in six months in 2011 and learned how to keep it off. He loves to pass along this knowledge, and so far, has helped nearly 100 people get healthy and lose weight through his health coaching website, www.FormerlyFatPhil.com. 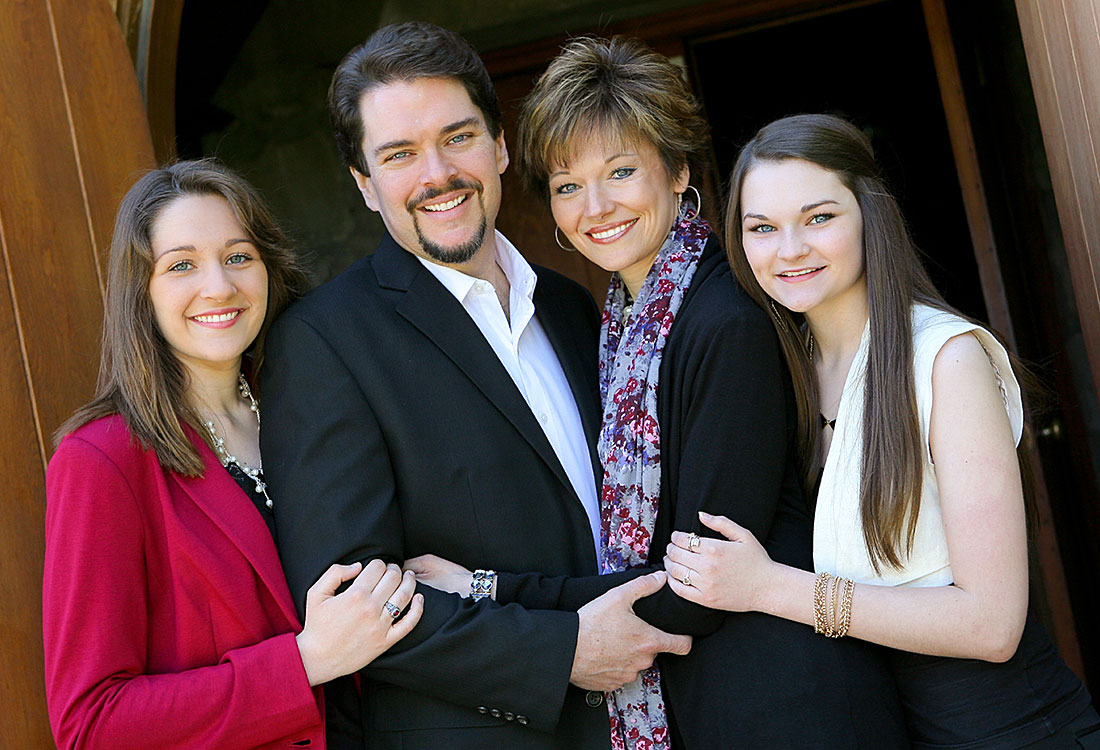 ALL IN THE FAMILY

Phil and Pam were married in 1990 and are the proud parents of two beautiful daughters.

Kayla graduated from Northwest Missouri State University in Maryville, MO and is now working for Cerner in Kansas City. In 2017 she married Kyle Yehle and Phil is glad to finally have another man in the family! She and Kyle are very involved in their church. Kayla sang and played violin with Phil and Pam for five years and is featured on several recordings. Although not actively involved in their travelling ministry, she continues to help with recording, engineering and mixing their CDs. Her beautiful voice is still heard in the background tracks at every Phil and Pam concert.

Alisha is attending college at Dominican University in Chicago. Besides her classes, she can usually be found working at least two jobs. She is an excellent student and very hard worker. Alisha is pursuing a degree and career in Fashion Business.

Lyrics for Phil's songs are HERE.